Re:Zero kara Hajimeru Isekai Seikatsu (Re：ゼロから始める異世界生活, lit. Re: Life in a Different World from Zero) or Re:Zero for short is a Japanese light novel series written by Nagatsuki Teppei and illustrated by Ootsuka Shinichirou. The series has also been adapted into manga and anime series. 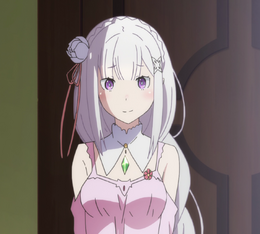 Emilia is a main protagonist and a half Elf.

Rem is a maid and the twin sister of Ram.

Ram is a maid and the twin sister of Rem.
Retrieved from "https://animefigures.fandom.com/wiki/Re:Zero?oldid=495"
Community content is available under CC-BY-SA unless otherwise noted.